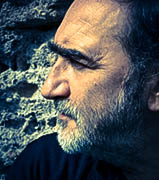 Mauro Cardi (Roma, 1955) received his musical education at the Conservatorio di Santa Cecilia, with Gino Marinuzzi jr., Guido Turchi ed Irma Ravinale, where he took a diploma in Composition, Instrumentation and in Choral music. He continued his studies with Franco Donatoni at the Accademia Chigiana di Siena and the Accademia Nazionale di Santa Cecilia. In 1984 he attended the Ferienkürse in Darmstadt. In 1982 he won the International Valentino Bucchi Prize (Melos, for soprano and orchestra), in 1984 the Gaudeamus Preize (Les Masques, Quattro Capricci per flauto, viola e chitarra) and in 1988 the International Gian Francesco Malipiero Prize (In Corde, for orchestra). In 1987 Promenade: Variazioni sul blu was chosen by RAI to represent Italy at the International Composers’ Tribune organised by UNESCO.

Since 1990 he has been involved in computer music. In 1995 he has been selected by IRCAM for its international stage. In 1997 Manao Tupapau has been selected as finalist at the 24th Electroacoustic Music Competition of Bourges. Alba, for zarb and electronics, has been selected at the ICMC 2008 (Belfast). In 2011 (with Altrove con il suo nome) and in 2012 (with Manao Tupapau) he has been selected and performed at the festival EMUFest, Conservatorio Santa Cecilia. He realized various electroacoustic works at the Istituto Gramma and Agon. Since 2000 he has been a member of the Association for research, production and diffusion of the electro-acustic music “Edison Studio”. With Edison Studio he has been selected at the ICMC 2002 (Gothenburg) and 2003 (Singapore), performing a live computer soundtrack composed for the silent movies Gli ultimi giorni di Pompei (1913) and Das Cabinet des Dr.Caligari (1919). In 2008 has been published the first DVD of Edison Studio, born from the collaboration with the video makers Latini and Di Domenico; on july 5th, in Ravenna, has been premiered the live soundtrack for the silent movie Inferno (1911), commissioned by Ravenna Festival, the soundtrack has been published in DVD in 2011 by the Cineteca di Bologna, and in 2013, at L’Aquila, the first performance of the new live soundtrack for the silent movie Blackmail (Hitchcock, 1929), commissioned by the Società dei Concerti B.Barattelli, both composed and performed by Edison Studio. In 2016 has been published in DVD a recently restored version of Das Cabinet des Dr.Caligari in a booklet edited by the Cineteca di Bologna with the soundtrack of Edison Studio. A large volume has been dedicated to the collective Edison Studio, “Il silent film e l’elettronica in relazione intermediale”, edited by Marco Maria Gazzano, containing essays by some of the most influential critics of the film music, as well as musicologists and historians music.

President of Nuova Consonanza from 1999 to 2001, co-founder of the “Scuola di Musica di Testaccio”, he teaches Composition at the Conservatory “Luigi Cherubini” in Florence and actually he teaches at the Conservatory “Alfredo Casella” in L’Aquila; he has taught and lectured about his music, beyond that in Italy, in different countries.
His works are published by Ricordi, RAI Trade, Curci, Edipan, Ut Orpheus, Semar and recorded by Dischi Ricordi, RCA, BMG Ariola, Nuova Fonit Cetra, RAI Trade, Edipan, Adda Records, Happy New Ears, Il manifesto, CNI.

Sorry, this entry is only available in Italiano.