“Every evolutionary step is an addition of information to an already existing system. Because this is so, the combinations, harmonies, and discords between successive pieces and layers of information will present many problems of survival and determine many directions of change.”
Gregory Bateson, Mind & Nature: A Necessary Unity, 1979 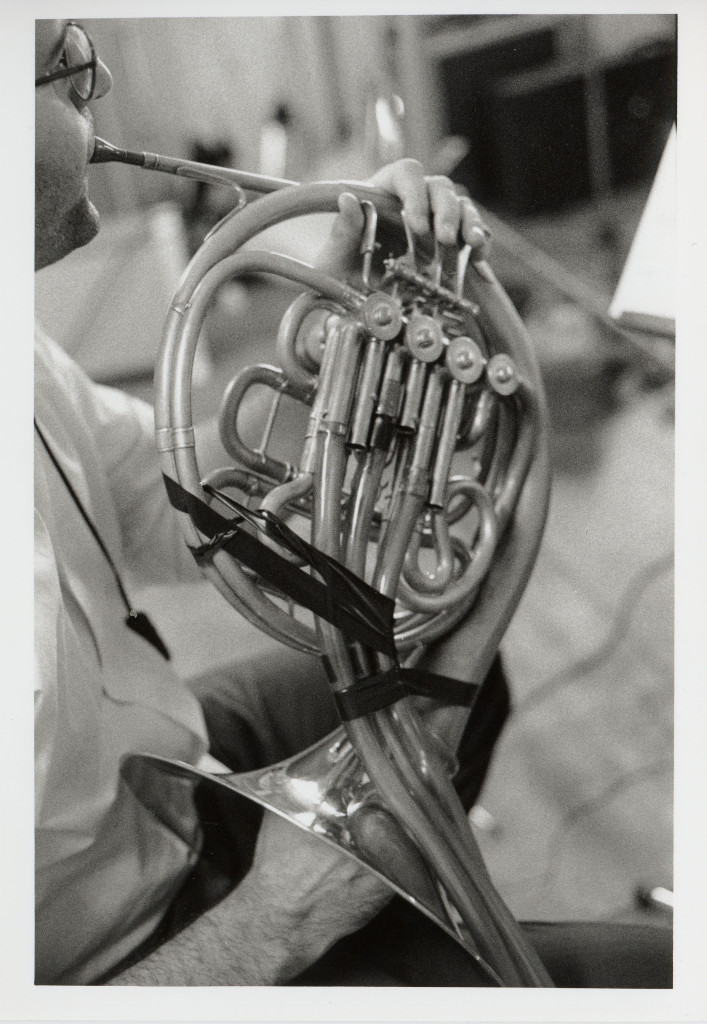 Ed Allen tests out Luigi Ceccarelli’s Respiri
In SPECTRAL ELECTRIC, Luigi Ceccarelli’s piece Respiri requires the insertion of hosepipes into the horn, each of which is attached to a funnel, and miked separately. When each of the microphone signals is sent to a loudspeaker in a different corner of the room, the result is rapidly panning horn sounds that swirl around the listeners!

The images below show Ed testing out his custom-made setup, fashioned out of hoses he’d just used to water his garden… .
.
The solo horn part
The modification of the French horn.

The function of the modified French horn in the live part is essentially spatial. The problem was to create a number of different sources of the sound of the single instrument in spite of its natural acoustic qualities as, like all traditional instruments, it does not have this possibility without the use of electronic amplification and it is generally used as a spatially isolated element within a larger instrumental ensemble.
The solution adopted was to apply three extra bells or funnels to the instrument, each with their own separate tubings, allowing the performer to freely decide which bell the generated sound would be transmitted to.

The three cylindrical casings of the horn that house the piston-valves which vary the length of the tubing, and thus the pitch, are unscrewed and opened at the bottom (only the Bb thumb valve is left intact). To these, three plastic pipes are fitted, which function as alternative tubings and which lead to a funnel at the other end. When the instrument is played and a piston is pressed, the valve opens, air passes into the relative tubing and the sound leaves the corresponding funnel instead of the original bell. The pitch of the sounds produced is not substantially altered as it did before but remains roughly at the tonic note of F, while the timbre changes according to the dimensions of the tube and especially according to the shape of the funnel-bell (obviously the sound coming from the new funnel-bells is of a lower quality than those of the original normal horn). This modification is based on onw used for a composition in the early eighties by the Canadian composer David Keane.

Spatialization and amplification of the horn

Thanks to the three additional sets of tubing, plus the metal tubing of the original instrument, the performer can send the sound in four different directions while he plays from the score. This variation of direction can be very fast, since the same techniques are employed as those that are traditionally used for changing the pitch of the notes played. The sound coming from the four bells (with the three extra funnel-bells) is then amplified with four microphones connected to four different speakers, which are placed in variosu postiions in the room around the listeners, helping the latter to perceive the spatial shifts of the sounds even more clearly. Thanks to this technique it is also possible to perform sequences of notes at a speed that is normally impossible for the instrument, and to produce a kind of tremolo between one amplified funnel and another.
.
. 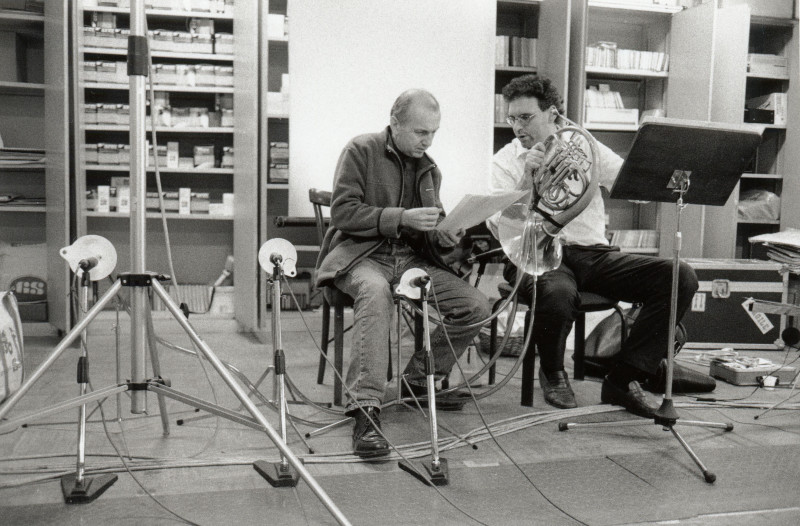 At the beginning of a new composition I never really know what will happen in the end, what the final result will be. It’s like setting out on a long journey: you know when you’re leaving, but then events and new discoveries lead you to alter many of your plans (unless it happens to be an organised trip, something I’ve always detested).
I don’t believe, as happens in Milos Forman’s film on Mozart, that a composer can imagine an entire composition in his head. If it were so, the music would certainly be too banal. For me a musical composition must grow gradually with time, working on the sounds step by step through presuppositions, verifications, errors, random discoveries, disillusions, illuminations. Without a rational logic, then, but with a constant and inexorable process of growth. At the end the object is so complex that you cannot contemplate the whole “all in one go”. And for me too the only way to understand it is to listen to it again each time.

With a wind instrument it is breath that generates the sound. Only after the player has produced the sound may it be modified with the instrument by means of a technique that combines blowing, lip tension and movement of the tongue and fingers. Player and instrument are part of a single complex machine, the millenary and continuous perfection of a technique devoted to the aesthetics of listening.

What urged me to write a piece for horn was precisely this close relationship between man and machine which, with the horn, achieves one of its highest levels, the French horn being the most evolved instrument of the brass family.

But machines are not necessarily finished objects. Just like razors, trains and telescopes, musical instruments too may be manipulated and perfected without limit.
Strangely, though this viewpoint is generally accepted for everyday technology, it is much less so when applied to musical instruments. It seems that musical instruments must always remain as they are: they change so slowly that it is almost imperceptible.

The experience of musicians and instrument makers of the past is certainly a heritage that cannot be renounced, but from this inheritance we must set out in search of new techniques which permit their modern counterparts to increasingly broaden the horizons of musical expression.
Musicians have discovered new, unexplored paths of creation through the combination of mechanical and electronic technology. And this exploration is only at its first hesitant steps in a universe of endless possibilities. We can never imagine what the music of the future will be like.