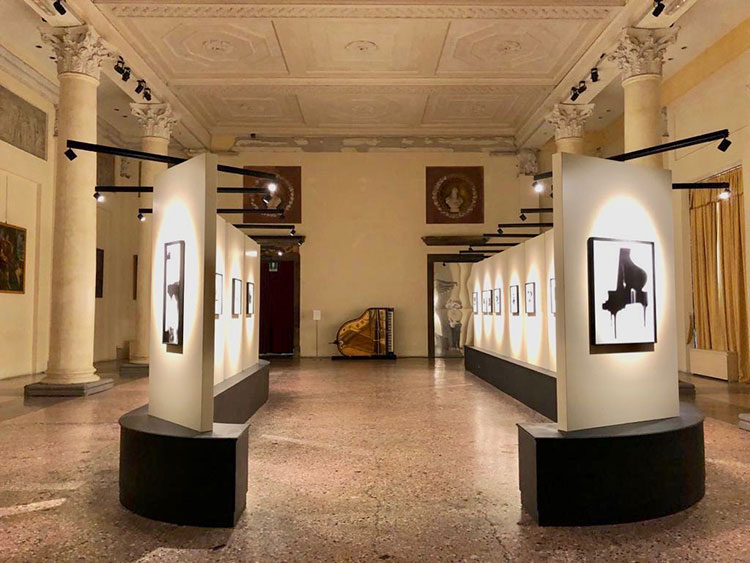 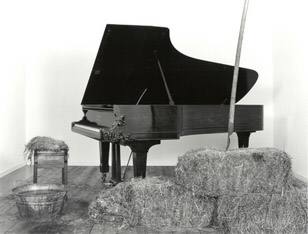 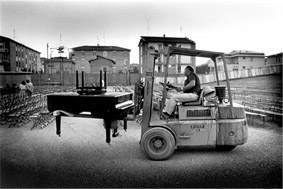 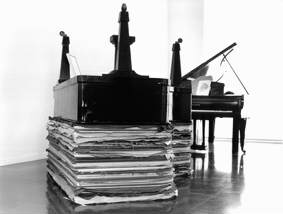 What are things when man is absent? Inert forms, prints on the surface of history or pulsing figures of the imaginary? And, particularly, what does a piano with no pianist do? Does it wait, meditate, evoke, is it simply there? Does it feel nostalgia for man? Perhaps the absence of man represents only the nostalgia it has of itself. Of sound, of timbre, of tone.
This original idea for an installation was born from a photographic series of great evocative power. The dreamy and vaguely surreal candour of the images, by encountering the ironic and imaginific texts and a multiform and ever-changing world of sound, gives place to a most fascinating and compact work. Different art-forms not only speak to one another, but, by listening to each other, converge.
So the piano, elected to the role of protagonist, rather than be observed by us, observes us. Implacable, black, shiny, tense. And also absolutely present, resting on one side, naked, receiving projected images on its cords, only lightly filtered by a veil, making its cords sing, stimulated by slight electro-mechanic vibrations.
Forty photographs, all rigourously in black and white, of pianos in various contexts, seen from unusual perspectives: they are revealed as creatures who are sometimes alarming, almost always mysterious.
Twenty accompanying texts go with the images, infusing them with a sort of evocative and sometimes whacky animism: they are brief stories, dialogues, poetic verses or paradoxical commentaries where the fantastic dimension is woven together with literary or musical references.
The sound ambience brings out the piano’s most unusual and interior voice, transforming the visual journey into a multi-dimensional space, translating written words into infinite shades of dialogue with the instrument.
(translation by Lee Colbert) 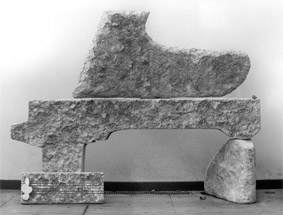 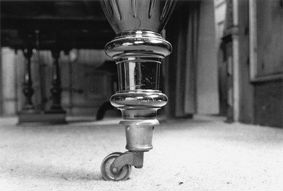 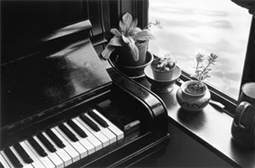