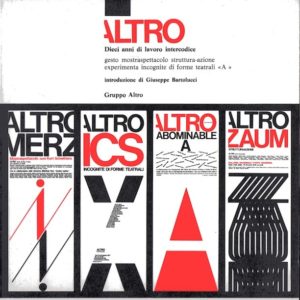 This book is collectively signed “Altro – lavoro intercodice”
Luigi Ceccarelli was member of  “Altro-lavoro intercodice” group from 1977 until 1981, year of the realization of this book and year in which the group changed name and became  “Altroteatro”.

Stage and audience amplification scheme.
Project of the mobile speakers placed above the spectators.
Four contact microphones amplified a metal structure operated by the performers.

On the making of sound

The starting material from which the sound elements of Abominable A are obtained is obtained by recording on magnetic tape some voices that read all the words starting with A in the Italian language according to the order of the vocabulary. Also added are some words, always starting with A, of the French, English, German, Spanish, Czech language.
The recording took place by having about twenty different people read, very long sequences without interruption. A particular reading rhythm was required to each of them, in order to obtain that each sequence was rhythmically different, but except for the word “Abominable”, a particular diction character was never required.
The sound events are produced by a four-track magnetic tape. Some parts are exceptions:
«Anagramma» (I part) where nine actors perform live the score of a dialogue
«Alibi», also performed live by the actor.
Some sound moments of «Attorcere» are obtained by amplifying the sound of the metal structure shaken by the actors. 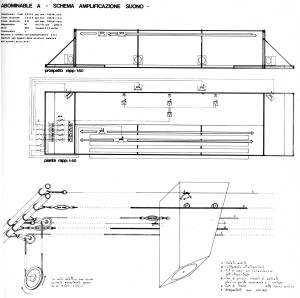 The sound diffusion system consists of six loudspeakers, four of which are fixed and two are mobile. The arrangement allows for two different acoustic spaces.
1 – the system consisting of the four fixed loudspeakers, placed behind the platform and behind the projection screens, determines a sound space corresponding to the visual space, that is to say “in front” of the spectators and along the entire platform. By modulating the four outputs of the recorder in amplitude, it was possible to simulate the movement of the sound along the platform.
2 – the listening system composed of the two mobile loudspeakers is not common to the field of visual actions, but completely independent, so that the sound space has no visual correspondence. In this case the sound comes from “above” the spectators. The movement of the sound is real, as the loudspeakers, driven by a system of pulleys, move parallel and independently along the entire audience.
The total time for carrying out the actions is determined approximately by the length of the list starting with the word “A” and ending with “Azurine”.
Each different visual action corresponds to a different processing of the sound material. The relationship between the two fields, however, is never of

correspondence, nor is there a relationship of subordination between them. The two components, sound and visual, proceed by influencing each other, so that the resultant is a single structure given by the sum of all the sound and visual events.
The main parameters of sound processing are: rhythm, timbre, movement, position in space.

I – Rhythm
Each action corresponds to a particular elaboration of the rhythm, of which two types have been considered: the characteristic of the starting material, that is the rhythm of the diction, and the elaboration of this by means of laboratory techniques. Some words have been isolated or even fragmented, in order to obtain single rhythmic cells, then assembled randomly or according to precise rhythmic criteria. Also, in some cases several sequences were superimposed or even a sequence was superimposed on itself.
This made it possible to obtain a more complex rhythmic structure up to practically a continuous sound.

– Timbre
In addition to the tonal characterization of the different reciting voices, some words were

electronically processed by means of filters, modulators and by varying the speed of the tape. Such modifications, in general, do not compromise comprehensibility; only in “Almohada”, the voices are processed in such a way as to be incomprehensible.

– Space
By means of the two diffusion systems it was possible to obtain a spatial distribution of the sound elements that is continuously varying
bile. A particular type of reverberation has been added to each sound, to give a feeling of different distance from the sound sources.

– Movement
As for the rhythm, the movement in space does not follow the movements of the visual actions along the platform and does not correspond to this, but the two elements combine with each other, so as to originate a system of complex and continuously variable relationships (eg. alignment score). In this way one never has the supremacy of one perception system over the other; even when one of the two components is very elementary, its contrast with the other significantly affects the perceptual effect, helping to modify the resulting structure.