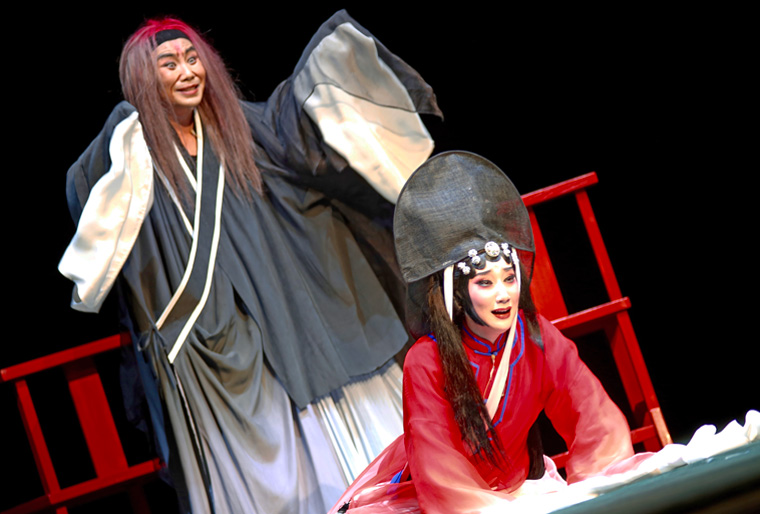 FAUST – a research on the language of the Peking Opera

text by Li Meini based on the tragic play “Faust, Part One” by Johann Wolfgang Goethe
Translation Fabrizio Massini

Thus Faust becomes Chinese and the myth turns out to be universal.

He enters the scene as an old man, with a long white beard and says he is willing to lose all his knowledge, to which he has dedicated his life, in order to find pleasure once more. It’s Faust, but he speaks Mandarin and moves according to the expressive rituality of Jingjù, an ancient form of Chinese theater. Faust – a research on language, a production of the Peking Opera and Emilia Romagna Theater – staged

at the Teatro Argentina in Rome until Sunday 12 – is a show so perfectly amalgamated in the diversity of its components, that you forget that on stage there there are seven musicians, eastern and western, whose music was written by three composers, two (Luigi Ceccarelli and Alessandro Cipriani) from Italy and one (Chen Xiaoman) from China, directed by the German Anna Peschke and the text (surtitles in Italian ) was rewritten by playwright Li Meini. The Faustian myth is reaffirmed in its universality, while the fusion of Goethe’s text with the theatrical forms of the Chinese tradition takes place in the sign of an effective and communicative theatrical gesture, even in its stylization. The four protagonists (Faust, Mefistofele, Margherita, her brother Valentino) are Chinese actors who, in a substantial fidelity to the Jingjù style, act in the indivisible unity of look, gesture, dance, acrobatics, word, song.

A song now hinted at, now more explained and free, in a very controlled variety of intonation and accents. The relationship between body gesture and music is perfect, a sound score that accompanies all 90 minutes of the show, in an almost uninterrupted series of culminating moments: the entrance of Mephistopheles, the courtship of Faust, his killing of Valentino, the Margaret’s desperation, her killing of her newborn son, the appearance of demons and imprisonment, before Faust, in an even virtuosic epilogue in the word / body relationship, asks who is to blame, him or the great director Mephistopheles , and whether what happened is reality or fiction. In the essentiality of the stage set the centrality of the performers stands out, which the costumes, very bright in colors, and the obvious make-up do not deprive of expressiveness and intentions, entrusted to lightning glances, to movements that suddenly stop. The music is spatialized, in such a way as to envelop the viewer, and the experience of using the effectiveness of Ceccarelli’s suspended electronic atmospheres meets the physicality of the instruments, enriching the dramatic and spectacular outcome. Very intense success.

notes of the composers

While tackling an ancient tradition such as Chinese Opera you can discover many unexpected aspects of it. For instance you could realize how shallow could be to consider pentatonic music as “simple music”. When you work together with professional Chinese musicians you discover many aspects of rhythmic complexity in those melodies and the extreme indissoluble bond between those rhythmic patterns the physical movements and phrasing of the actors.
We decided to respect that organic world made of text, theatre, motion and music, by creating a different layer, parallel to the  Chinese one, but completely integrated. We realized many timbre expansions of the sounds of the Chinese instruments and of the Italian ones with the intention of finding their common elements, to represent a kind of mutual need of each other to find new possibilities for both musical languages.

The electronic parts are only made by processing the sounds coming from the Chinese and Italian instruments.

This way, the use of electronics represents a sort of magnifying lens by which you can listen to those instruments in a different way, a magnifying lens as a bridge between cultures. The electronics is also used to set and move the sounds in a multidimensional sound space, to form the acoustic environment of the narration which evolves along with the drama. 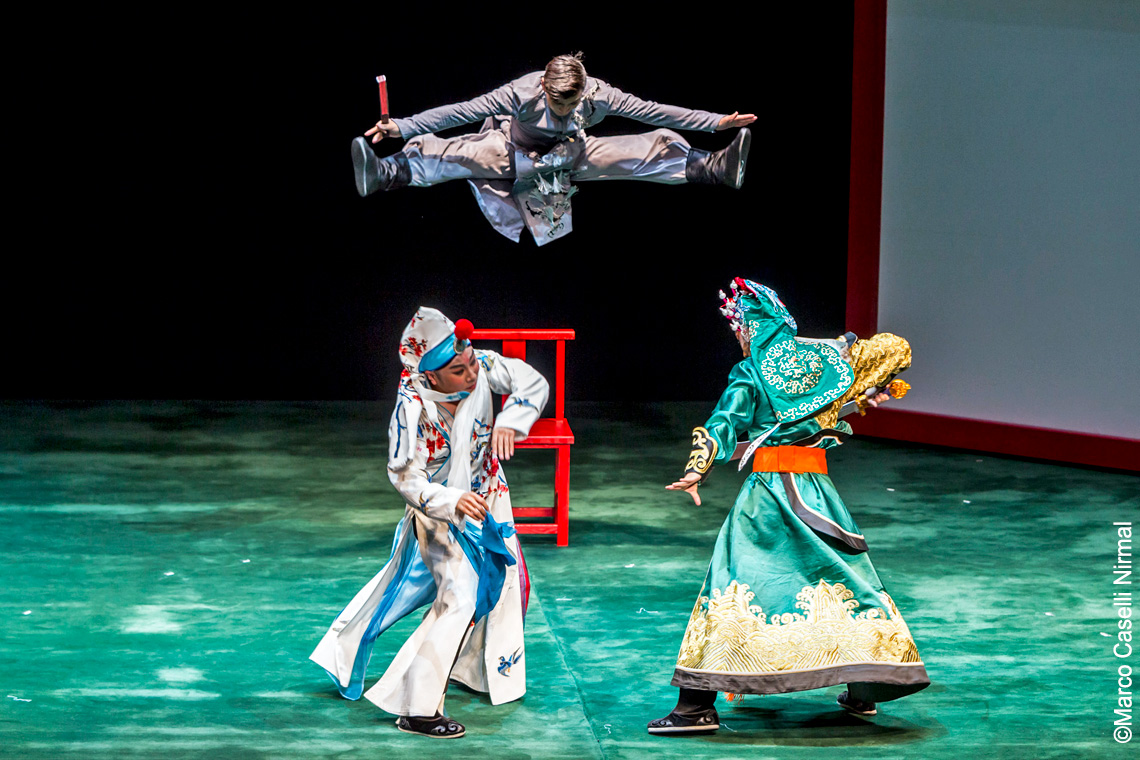