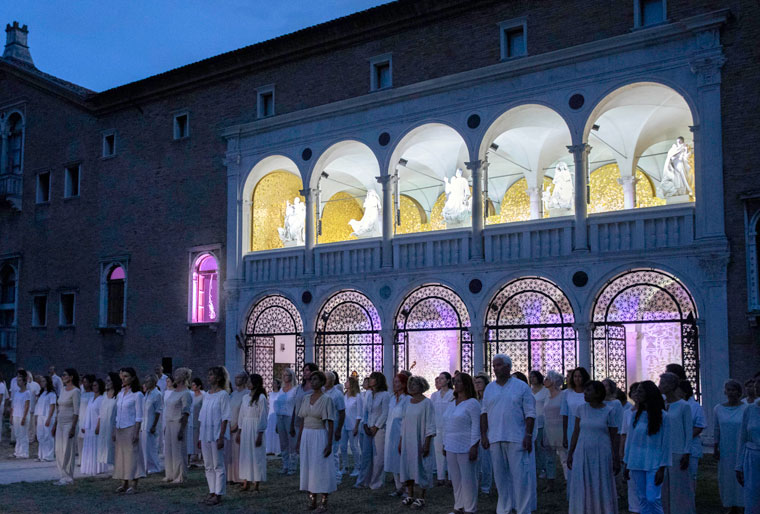 ……… But how much and more than words are the dancing rhythm and the music – wonderful, by Luigi Ceccarelli – to tell us about what our eyes see ……..
Luca Doninelli, The newspaper, 7 July 2022

….. all the Paradise that we will see is a journey towards ecstasy, towards the exit from oneself, from compassion, from habit; a little new age and very ‘social’ ecstasy, made up of political and human indignation, of the need to overcome the daily condition of laziness, awe, lack of ability to fly ……..

…. There, on the ground floor, clouded by a veil, the musicians play violent music by Luigi Ceccarelli, with electronic interventions …..

…. Everything is wrapped in sounds: voices, murmurs, sighs, solos of instruments and ensembles, variations and electronics, a whole world …..

…. Who looked at the sky and who, further down, our pale romantic planet, was carried on the last journey by the voice of Ermanna Montanari. Mixed with archaic, depth harmonics, she sublimated herself in a concert of sounds with almost childish grain, as the voices of the world must have been originally. Little in certain places she let him concentrate on the words. The sense was lost in favor of music, monodic polyphony, another turn in circles and break through perspectives towards vertigo (and ordered chaos) a la Borromini. That rhythm, that chant, that spoken song made the void and carried upwards, somewhere, leaving all the others present and the others around, the bodies stretched out on the roundels on the ground like dust of stars in astronomical skies or of imaginary figures in astrological skies. It was a vibrating “with”, feeling “the love that moves the sun and the other stars”, the last verse, the breath of melting from the enchantment. Of the trip.

…… Every moment is characterized by the music of Luigi Ceccarelli, which imbues all of itself, giving atmosphere and substance to the apparitions that follow one another, as in a beneficial dream. Eventually darkness invades the scene and it is then that the stars become more visible, and it is then that, lying on the lawn, they seem so close to us that they can touch them, witnesses once again of a “transhumanation” that here, on earth, only a theater imbued with wisdom and light can perhaps make us live.