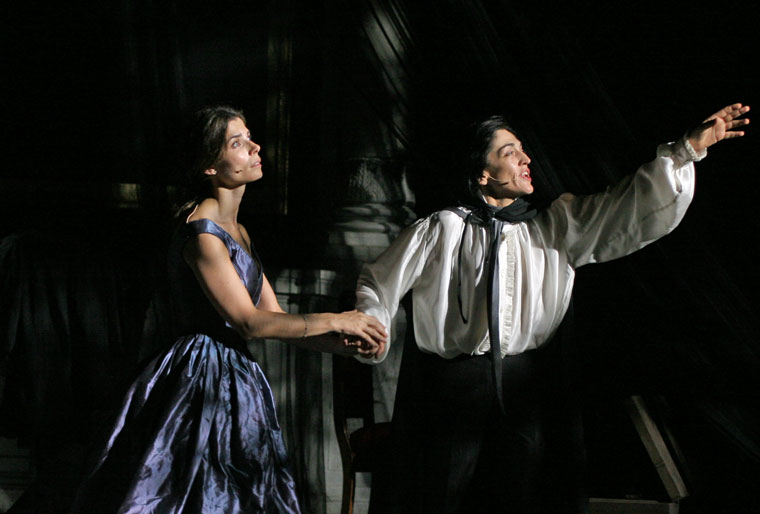 There are countless great romantic composers, but also of the early twentieth century, who drew inspiration from the texts of Lord Byron and the characters of his poems for the creation of music of the most varied genre: from lied to opera, from symphonic poem to sonata. It is not too risky to say that the history of literature and music, but perhaps of all European culture in the last two centuries, owes much of its innovative power first to the vital and disruptive force of romanticism and then to attempts to deny it.

For the realization of this work it was considered fundamental to start from the music dedicated to the work of Byron, which brings back to the atmosphere of the spirit of those times, to propose it again in an elaboration typical of today’s music, demonstrating that contemporary culture is now definitively emancipated from the romantic culture and that, like

every historicized period can now deal with it without stylistic misunderstandings.

The music of “Byron and Teresa” was created by reworking three well-known compositions by as many 19th century composers inspired by famous Byronian heroes: – The symphonic poem “Aroldo in Italia” (1834) by Hector Berlioz for viola concertante and orchestra of which I am used the fourth beat and the melodic part of the viola of the second half, played live by Diego Conti on a five-stringed electric violin. – “Mazeppa” (1854) by Franz Liszt in the double version for piano (fourth of the transcendental studies), and subsequently orchestrated by Liszt himself as a symphonic poem. – “Manfred” (1849) by Robert Schumann, a symphonic piece written for the eponymous dramatic poem by Byron of which only a brief initial part is present.

The three compositions were digitized and de-structured with sound processing and editing software. The materials obtained have been reworked and reassembled, keeping intact the harmonic and melodic components of the originals but increasing their timbre and polyphonic characteristics, thanks to digital technology intended as overcoming the technical-expressive limits of traditional instrumental performance. The processing operations allowed a reinvention of the musical form adapted to the new text by Nevio Spadoni and the acting of the two actresses.
The sound of this work is not intended as a musical commentary on the story, but aims to reconstruct an acoustic space around the characters that alternately contrasts the time of memory – emotional and intimate – with the present time – concrete and aimed at communication -.