with the participation of Alessandra Novaga 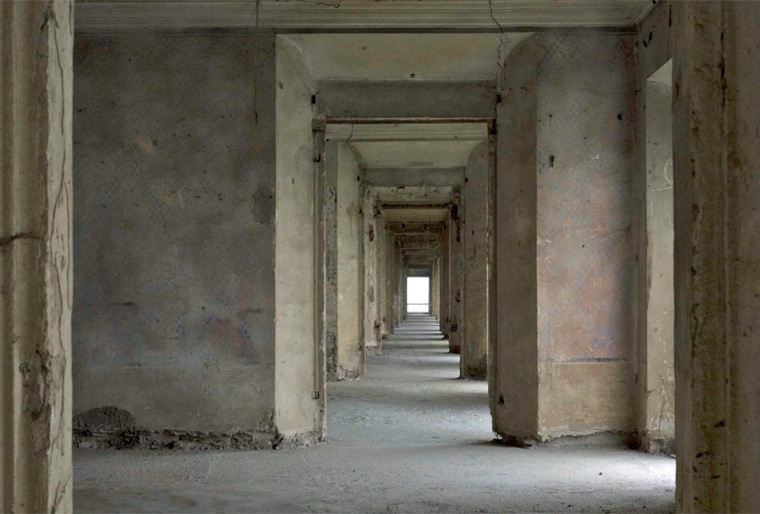 Emptiness, absence, silence, suspended time, non-place, ruin, skeleton. Words remain available to describe and define, but as often happens, photographs and films succeed in the enterprise more directly. They contain no action, these spaces, no life or obvious function. It is a structure that survives due to some care, whose charm is not entirely clear, even to those who suffer it. The spaces contain light, even if it is mostly shadow, and sound, which is more dusty than the place itself.
.

There is a perennial silence that is not a memory of the past. That went with everything else, and is counterpointed by fragments of the external soundscape. By opening doors and windows, inside and outside are brought into communication, in full evidence. There is not much outside either, there is the countryside, a long driveway, an embankment, fields. That too is a sort of emptiness but in a different suspension. The architectural volume of the building, mutilated in parts, is impressive and is there in front of everyone.

There was a long wait for those spaces that then suddenly filled frames that willingly and on impulse would inspire action in places that lack them. It is a move beyond the fascination and picturesque of abandoned architecture, beyond the moving remembrance of a great past of which only traces remain.

Empty, with memory, a space freed from passions, from everyday life, from the negativity of human existence. A limbo. Kept away from today. Now it is put into dialogue and shows its light by partially and only momentarily coming out of the shadows.

Space that returns pure state, foundations, intersection of walls, corridors, ceilings, in any case evocative of evanescent presences, in a literary and filmic sense, even more than deriving from pictorial and photographic figuration. The beauty of listening to the internal space (almost an introspection) and the external space (sounds and noises of the countryside and work) also intervenes. Sequence of spaces, rooms enclosed between walls full of traces, but open as communicating vessels. One-color spaces devoid of happiness and pain ready to project us into a future that ensures history and oblivion. I feel the memory of the place in the whispers and in the glimmer of some light. But in the end it is so vague and feeble, I don’t see it.