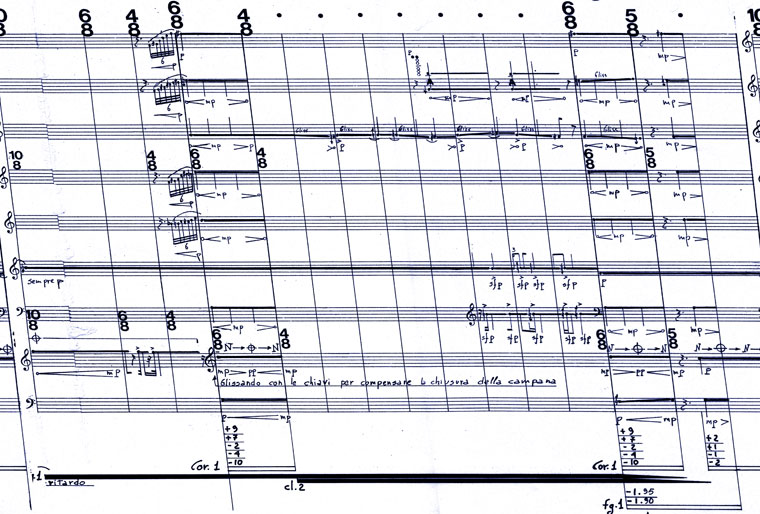 At the basis of the musical invention there are not only the sounds of tempered pitch and harmonic timbre but, at times it may be interesting to consider the sounds for their inharmonicity and for their timbre complexity. Spectral complexity is the reference feature on which the relationships between the sounds of this piece are built, giving a clear preference, even on an aesthetic level, to the harsher and more dissonant multiphonic sounds. We tried to keep the overall phonic result in a medium-high density threshold, in an area where the difference between harmonic spectra and inharmonic spectra is ambiguous, while the harmonic relations of the superimposition of pitches are simplified as much as possible, and this to allow a clear perception of the timbre mixture.

Instruments
Classical octet: two clarinets (one of which is also a bass clarinet), two oboes (one of which is also an English horn), two bassoons and two horns, to which the flute has been added. The horns very often have the function of soloists.
All instruments are amplified with microphones placed very close to the sound source in order to have individual control for each instrument. In some moments some instruments are processed electronically by means of two Pitch Shifts and with a delay device of about four seconds.

Timbre
From a timbral point of view, a general classification was considered:
a) simple instrumental sounds with harmonic spectrum and overlaps in unison.
b) chord overlapping according to simple harmonic ratios (first three or four harmonics).
c) chord overlaps according to more complex harmonic ratios (first 16 harmonics).
d) multiphonic sounds with a (relatively) inharmonic spectrum and overlapping of several multiphonics.

With electronic processing we try to obtain a greater complexity of the timbre.

Pitch
Two harmonic scales with fundamental Bb 58.25 Hz and Fa 43.65 Hz have been used. The first sixteen harmonics of these two scales are used, considered sufficiently close to the temperate scale and therefore easy to perform. The 13th and 15th harmonic correspond to quarter tones of the tempered scale, and in the score they are written as altered quarter tones. Finally, the seventh and fourteenth harmonic should be played slightly lower than the temperate scale. The combination of the harmonics from number nine to number sixteen of the two harmonic series is often used as a melodic series, also carried to different octaves.
Pitch Shift operates three types of pitch alteration:
1) generating a chord with intervals from semitone to seventh.
2) generating more neighboring sounds that create beats.
3) generating the lower octave of the original sound, considering this more than anything else a timbral alteration. The unison and octave ratios, which are numerous in this piece, are not always considered as precise ratios, but as a continuously variable range of more or less a semitone. In the score there are in some areas some glissati in the range of a semitone, which have precisely the purpose of making the feeling of unison indefinite. In the first part, the chords with major sevenths have the same purpose. These variable ratios also have a tonal function.

Structure
When I have to write a piece of music, I need the help of visual schemes that allow me to imagine the piece as a whole as precisely as possible. Of course the biggest problem for those who write music (at the end writing I would prefer the term design, as used in architecture) is to be able to “see” time with a single mental image.

For this reason, not knowing a more effective system than the Cartesian one, I wrote this piece entirely on one sheet only assigning the horizontal dimension to time, trying to imagine how the “space” dimension really corresponds to the “time” dimension. divided into three sections of more or less equal duration. The ratios of duration and the internal trend of each section do not follow any type of numerical calculation, but are established on the basis of the mental image that was taking shape as new details were always added to the scheme.

The first section is inspired by the ritual music of Tibetan monks, which in my opinion represents very well a conception of music in which variable timbral elements coexist (from the play of beats between two almost sinusoidal sounds produced with shells, to the complexity of the timbre of their trumpets ). Many characteristics of Tibetan music have been maintained such as the clear alternations between very dense sound clusters formed by all the instruments of the orchestra and very simple sounds, and clear alternations between the piano and the forte. Characteristic intervals of this section are unisons and octaves, semitones and sevenths intended as an alteration of the octave.

The second section is based on simple sounds held by one or two instruments on which short chords of many voices are inserted with harmonic ratios between the 8th and 16th. These chords are played either by many instruments or by just the horns replicated up to five times by the Pitch Shift. The sounds held are sometimes stretched by the delay.

In the third section the chords become more irregular, the attack and the end of the various sounds are no longer contemporary and the single timbre of each instrument is no longer harmonic, but multiphonic.