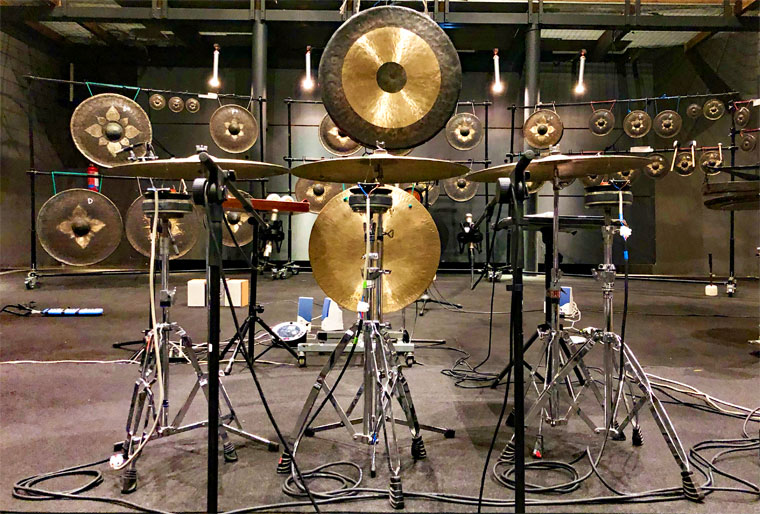 I started thinking about vibration exciters for playing stringed musical instruments or instruments made of vibrating surfaces as early as the first year of a conservatory student, but only after several years did I manage to develop them as a musical idea.

The experimentation began when I asked a speaker factory to build vibration exciters. Of course, these were not real exciters, those used in the industrial field to test aircraft parts for example, but the speakers which I had had the membrane removed to replace it with a second centering device (see drawing below).

Vibration exciters are basically speakers that vibrate but do not sound, (at least at frequencies up to 200 herz).
The oscillations to make the exciters vibrate, in this case, are sinusoidal generators.
By connecting the vibrators with a taut nylon thread to a plate or a tam tam, the mechanical oscillation produced by the sinusoidal generators is communicated and the instruments begin to vibrate producing their sound. There is another method for making instruments sound, and that is to create a feedback chain with a microphone. Microphone, amplifier, exciter and instrument when connected in series in a closed chain produce the typical feedback of amplification systems.
This is achieved with frequencies between 15 and 35 Hz.
In this case, the percussionist produces the sound

placing various sticks on the instruments, which make the cymbal and the tom tom sound not because they hit it but because it is the instrument that beats against the sticks.

Titanic & Icarus s.p.a. it is a work composed according to a process of stratifications. It starts from a series of files stored in a sequencer on which the signals obtained from a synthesis of sinusoidal sounds are stored. These oscillations are not heard, but are sent to four vibrating exciters which, in turn, vibrate three cymbals and a tam-tam. With this system, percussion instruments acquire unusual characteristics: very pure spectrum sounds without attack with the possibility of obtaining notes of different pitches.

The sound here, being produced not by a loudspeaker membrane, but by an instrument, has a complex spectrum that depends on the instrument itself.
The percussionist therefore does not need to strike the instruments, but makes them play without touching them. Another mode of sound is to make the instruments vibrate with infrasonic frequencies, always with the same exciters, and therefore inaudible.

Within this “self-sufficient system, the action of the percussionist is not aimed at generating further sounds, but at varying those already present, placing various types of sticks on the vibrating body that will give a different tonal characteristic.

depending on the type of material that constitutes them. The overall result of these operations is then detected by a series of microphones placed very close to the instruments and sent to a quadraphonic listening system.

As for the general structure, we can say that the piece has a slow evolution and is made up of sounds with gradual attack to allow the listener to clearly perceive the micro structural variations of the timbre. There are 4 distinct parts: a crescendo of about 4 minutes, a part in which the percussionist places the sticks on the cymbals, a part in which the percussionist uses the microphone to generate feedback and the final section in which a complex spectrum chord to which contribute all the instruments goes to decrease until silence.

“Titanic & Icarus s.p.a.” is the name of a spaceship building company in the science fiction novel “Venus on the Shell” by Philip J. Farmer. It represents for me the idea of ​​the workshop of the future, technological and digital, but still with a precise dedicated mechanical design work. After all, we cannot ignore a mechanical dimension of things, it is the mechanics that move the entire universe.

With these instruments I made two other pieces in which the vibration exciters are applied to the piano strings: “Aura in Visibile”, in which a flute sends the sound to the exciters which in turn vibrate the piano strings and “Aura In Visibile.2 ”, for a piano without any performer.